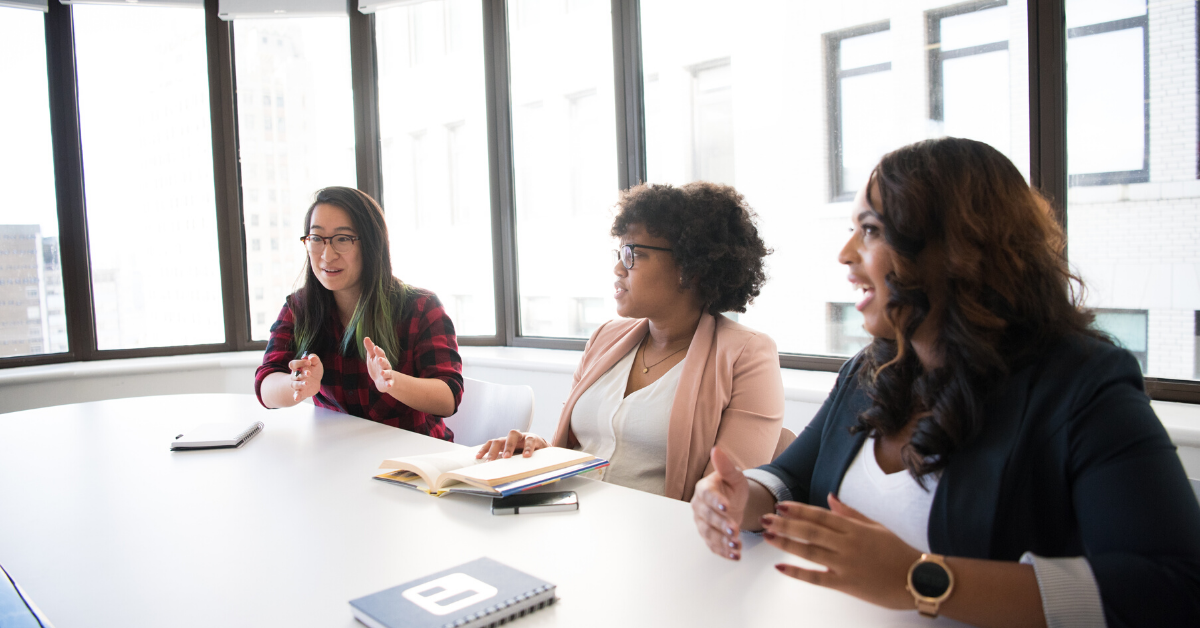 Reaching gender parity has become an increasingly important Diversity, Equity, and Inclusion (DEI) goal for organizations across the globe. Gender parity provides a number of organizational benefits that include attracting and retaining talent, creating a strong company culture, encouraging high employee performance, and maintaining sustainable economic growth. While the representation of women in the workplace has increased over the last 60 years, gender inequity still persists. There are still a number of hurdles women have to jump in order to advance at work, including gender pay gaps, lack of opportunity to leadership positions, gender discrimination, and biases in the workplace.

McKinsey’s 2019 Women in the Workplace, which classified gender as a binary concept, is the largest study of the state of women in corporate America. It shows a number of findings that support the idea that while organizations are both investing in gender diversity and seeing the value of having more women in leadership positions, women continue to be underrepresented from entry level all the way up to C-suite.

The largest difference between female and male representation occurs between entry level to manager, when female representation drops from 48% to 38%. The data shows that for every 100 men promoted, only 72 women are promoted. Women get stuck in entry level positions, and are unable to advance to manager positions, ultimately inhibiting upward mobility to climb the corporate ladder at all levels.

This begs the question, why does this happen? Why are women unable to move from entry level positions into leadership in the workplace? Enter the “broken rung” – a concept that explains that as men outnumber women in initial manager-level positions, there is a smaller and smaller margin of opportunity for women to climb the corporate ladder into senior manager positions, and eventually, into C-suite. Facebook COO Sheryl Sanberg explains, “There’s no good reason why so many more men than women are being tapped for promotions, only a bad one – bias. Largely because of this, men hold 62% percent of manager jobs; women, just 38%. From that point on, it’s impossible for women to climb fast enough to catch up.” Furthermore, this “broken rung” disproportionately affects women of colour, where for every 100 entry level men who are promoted to manager, just 68 Latinas and 58 Black women are promoted.

It’s important for organizations to recognize the intersectionality of women in the workplace, and those who identify underrepresented groups in different ways. In McKinsey’s report, the data showed that “women of colour, lesbian and bisexual women, and women with disabilities are having distinct, and by and large worse, experiences than women overall”. Organizations who acknowledge the presence of and difference in challenges that BIPOC women and LGBTQ2+ women face are more likely to reach gender parity on all levels and their diversity and inclusion goals.

Some actions organizations take to reach gender parity include creating DEI policies, providing DEI training to people leaders, and developing clear and consistent hiring criteria to advance women leaders in the workplace. While the “broken rung” continues to be an often unaddressed issue, there are a number of actionable steps people leaders can take in order to create successful workplaces for women to thrive in.

Advancement plans are a combination of steps and tools employees can take to advance in their career. Advancement plans might include classes for an employee to take, ideas to exceed in their role, and avenues to apply for new positions in the company. MetLife’s Developing Women’s Career Experience does a great job of offering employees actionable advancement plans; MetLife provides a 14-month career development program to encourage and train women in the workplace, which not only helps women invest in their professional development, but also  creates a sense of urgency to promote women in all levels.

Mentorship is a key tool in the workplace to help women advance to the top. Having a mentor allows women to ideate success and develop career goals they might not have the opportunity to alone. Not only do mentors provide women spaces to learn and effectively communicate, they also allow new hires to familiarize themselves with company culture, create goals, and thrive.

Companies can reach all DEI goals, including the advancement of women, by treating DEI as a business priority. This can look like setting targets, tracking KPIs, obtaining signed commitments from leadership, and offering team rewards for reaching DEI goals. The returns on investing in diversity and inclusion can be tremendous, but only if organizations are committed to all aspects of DEI, including gender parity on every level. Lunaria’s Education Units are powerful tools in supporting people leaders as they develop employee capacity to create inclusive spaces for people of all genders.

Biases within organizations are a key attributing factor to lack of diversity, poor employee experience, and company success as a whole. Biases act as barriers to equality, where often implicit or unconscious biases are overlooked, yet inhibit fair assessments of employees and decisions to promote in the workplace. Lack of women in the workplace, and especially in leadership positions, is affecting both the profitability of individual organizations, and the economy. In McKinsey’s The Power of Parity: Advancing Women’s Equality in the United States report, the McKinsey Global Institute (MGI) found that every US state and city has the capability to add at least 5% to their GDP by advancing opportunities for women in the workplace.

As organizations continue to scale and grow, reaching gender parity should be kept top of mind in order to cultivate an inclusive workplace for women and the opportunity of upward mobility when climbing the corporate ladder. If every woman is promoted from entry level at the same rate as a man, corporate America will add 1 million women in leadership positions over the next 5 years.

Women in the workplace all experience a unique set of challenges and implications based off of their diverse identities. Organizations who consider the intersectionality of women, including the vast spectrum of backgrounds, sexualities, races and religions that make up one’s identity, for example, are more likely to recognize patterns of advantage and disadvantage, and ultimately, reach gender parity. By prioritizing opportunities for leadership positions, not only do organizations break the barrier of the “broken rung”, but they also help create engaged leadership teams and successful profitability.